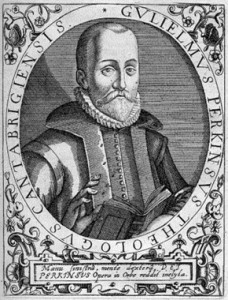 William Perkins (1558-1602) was a clergyman and Cambridge theologian who was one of the foremost leaders of the Puritan movement in the Church of England.

Perkins was born to Thomas and Anna Perkins at Marston Jabbett in the parish of Bulkington, Warwickshire, England in 1558, the year in which the Protestant Elizabeth I succeeded her Catholic sister Mary as Queen of England. Perkins lived his entire life under Elizabeth I, dying one year before the Virgin Queen’s own death in 1603. Perkins’ relationship with Elizabeth was ambiguous: on the one hand, she was Good Queen Bess, the monarch under whom England finally and firmly became a Protestant nation; on the other hand, Perkins and the other members of the Puritan movement were frustrated that the Elizabethan settlement had not gone far enough and pushed for further Reformation.

Little is known of Perkins’ childhood and upbringing. His family was evidently of some means, since in June 1577, at age 19, Perkins was enrolled as a pensioner of Christ’s College, Cambridge. He would receive his BA in 1581 and his MA in 1584.Perkins’ early adulthood is often portrayed as being one of rampant immorality, although it is unclear how much of this portrait is influenced by the later slander of his enemies, on the one hand, and the general Puritan tendency to exaggerate their youthful depravity in order to make their subsequent conversion more dramatic, on the other hand. At any rate, there is the possibility that Perkins fathered a child out of wedlock during this period, and also some suggestions that he dabbled in astrology at this time.

According to an unverifiable story, Perkins was convicted of the error of his ways after he heard a Cambridge mother say to her child, “Hold your tongue, or I will give you to drunken Perkins yonder.” Whether or not the story is true, it is clear that Perkins had a religious awakening sometime between 1581 and 1584.

Perkins thus began a lifelong association with the “moderate-puritan” wing of the Church of England, which, according to historian Peter Lake, held views similar to those of the continental Calvinist theologians Theodore Beza, Girolamo Zanchi, and Zacharias Ursinus. Perkins’ circle at Cambridge included Laurence Chaderton and Richard Greenham.

Following his ordination, Perkins preached his first sermons to the prisoners of the Cambridge jail. On one celebrated occasion, Perkins encountered a young man who was going to be executed for his crimes and who feared he was shortly going to be in hell: Perkins convinced the man that, through Christ, God could forgive his sins, and the formerly distraught youth faced his execution with manly composure as a result.

As a “moderate Puritan”, Perkins was firmly opposed to non-conformists and other separatists who refused to conform to the Church of England. On the other hand, he also opposed the Elizabethan regime’s program of imposing uniformity on the church. For example, when Archbishop of Canterbury John Whitgift imprisoned Francis Johnson for Johnson’s support of a presbyterian form of church polity, Perkins loudly defended Johnson.

On January 13, 1587, Perkins preached a sermon denouncing the practice of kneeling to receive Communion, and was ultimately called before the Vice-Chancellor as a result. During the final set of trials against Puritan ministers in 1590-91, Perkins confirmed that he had discussed the Book of Discipline with Puritan ministers, but claimed that he could not remember whom he had talked to. Perkins married Timothye Cradocke of Grantchester on 2 July 1595. (He had previously resigned his fellowship at Christ’s College, since only unmarried men could be fellows.) Eventually, the couple would have seven children, three stillborn.

Perkins first gained international renown as a polemicist with the publication of A Reformed Catholike in 1597, in which he argued that Protestants were the real catholic Christians.

In his lifetime, Perkins attained enormous popularity, with sales of his works eventually surpassing even Calvin’s. His works were translated into Dutch by Everard Boot, German, and Latin, and to a lesser extent into French, Czech, and Welsh.

In 1602, Perkins suffered from colic. After several weeks of suffering, he died on October 22, 1602, at age 44. James Montagu preached his funeral sermon, taking as his text Joshua 1:2, “Moses my servant is dead.” He was buried in St. Andrew’s, the church which he had pastored for eighteen years. [More via Wikipedia][Brook’s biography is here.][Another nice biography]

The Complete Works of William Perkins:

The Art of Prophesying.
{web via Monergism} {mobi via bringthebooks}
This title is also available as a Digital Puritan e-Book.

Commentary on the Sermon on the Mount.
{web via Nesher Christian Resources}

A Discourse of Conscience. (199 pages)
{pdf via Google Books} {mobi via bringthebooks}

An Exposition on the Apostles’ Creed.
{web via Nesher Christian Resources}

God’s Free Grace and Man’s Free Will.
{mobi via bringthebooks}

The Golden Chain. (187 pages)
[pdf epub mobi via On the Wing][mobi via bringthebooks]
The On the Wing version is newly re-typset and gently modernized by William Gross.

Of Man’s Imaginations.
{mobi via bringthebooks}

On Predestination.
{mobi via bringthebooks}

A Salve for a Sick Man.
{mobi via bringthebooks}

Treatise of the Vocations. (34 pages)
[pdf epub mobi via On the Wing][pdf via Bobby Jenkins]
The On the Wing version is newly re-typset and gently modernized by William Gross.

A Discourse of the Damned Art of Witchcraft.
{mobi via bringthebooks}

The Works of William Perkins, Volume 1. (830 pages)
{pdf via puritan-books.com}
This volume contains the following:

The Works of William Perkins, Volume 2. (784 pages)
{pdf via puritan-books.com}
This volume contains the following:

The Works of William Perkins, Volume 3. (1068 pages)
{pdf via puritan-books.com}
This volume contains: