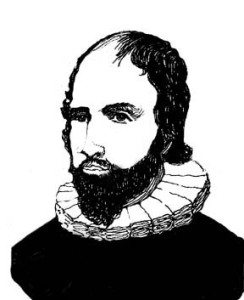 When the Lord raises up a number of faithful ministers of the Gospel at once, as he did in Scotland with the Covenanters in the seventeenth century, not all of them are given due recognition and many are forgotten over time. One such man is William Guthrie (1620–1655), born in 1620 at Pitforthy, Scotland. Mr. Guthrie was the minister of the church in Fenwick, Scotland, and a pastor who dearly loved his flock and the Lord that had bought them. He was a man of tender heart and earnest love for the Truth as it is in Christ Jesus. Though little has been written of him, what we do know of him warms our souls.

William Guthrie studied at St. Andrews University under his cousin, James Guthrie, and later prepared for the ministry under Samuel Rutherford and is considered to be the earliest fruit of Rutherford’s labors. He was licensed to preach in August 1642, and ordained in the newly erected parish of Fenwick on November 7, 1644. Being the first pastor there he found a great ignorance of the things of the Lord amongst the people and a general neglect of religion. Though this was very discouraging, his zeal for the glory of his Master and his great love for the souls of men were blessed of God and accompanied by the power of the Holy Spirit in the conversion of many souls.

His special love for the souls of men could be seen in the extraordinary lengths to which he went in getting men to come to hear the preaching of the Word. On at least one occasion he went into a house in which he knew the occupants did not attend the worship services. In the course of conversation with them, he would ask them what they thought of their minister. When he was told that they didn’t really know much about him because they never went to church, he invited them to come, sometimes even bribing them with money, or arranging to meet them there. When they arrived they were surprised to find that it was the minister himself who had visited and invited them! We are also told of a man who neglected the public worship of the Lord’s people so that he could go hunting. When asked what he would make by going hunting for the day, he replied that he would get half-a-crown. Upon hearing this, Guthrie promised that if he came to church that week he would give him that same amount. The man came, and never failed to attend services after that, eventually becoming a member of the Session.

This wonderful Presbyterian pastor was highly esteemed in the eyes, not only of the people of Fenwick, but in all of Scotland. He received numerous calls to minister in various churches throughout that nation, most of them much larger than the one in Fenwick. But he preferred to remain where the Lord had first led him and where His people loved him. In the light of his great popularity there is very little that remains of his sermons or writings. Many sermons were printed and circulated in his name which either he did not write, or were poor and inaccurate notes taken from one of his sermons. A few of his actual sermons were published, mostly after his death.

There is, however, one book that this eminent servant of the Lord did write. It has been published under the title A Christian’s Great Interest, and is still in print. The English divine John Owen said that “…for divines, that author I take to have been one of the greatest divines that ever wrote; it is my Vademe. I have written several folios, but there is more divinity in it than in them all.” This is a very high commendation from a great scholar whose own words have followed him to bless the saints through a number of centuries.

This wonderful little book is divided into two parts. The first gives various tests whereby someone may know he is a Christian; the second shows plainly the way of salvation. It was mightily blessed of the Lord firstly in Scotland during a time when many churches lost their pastors, and then throughout the world in various translations. It continues to be a source of comfort and encouragement to the Lord’s people today, and ought to be a part of every Christian’s library.

In order to deal with his tendencies toward melancholy as well as the feeble state of his body, William Guthrie loved to engage in sports, such as curling and fishing to give him physical exercise, although he never allowed these activities to keep him from pursuing his primary desire to see the salvation of men’s souls.

Though surrounded by others who were martyred for their faithfulness to Christ, yet Guthrie died of a complication of physical disorders on October 10, 1665, leaving a widow and two daughters. In his lifetime he had been imprisoned, but never suffered physical torture. He was scorned and mocked, but endured all for the sake of the gospel. [via CCEL] [Alexander White’s excellent biographical sketch is here.] [Another useful biographical sketch is here.]

The Works of William Guthrie:

The Christian’s Great Interest. (147 pages)
[pdf epub mobi txt web via CCEL]
“A classic on assurance of faith” (Beeke & Pederson, Meet the Puritans, p.712). “The best book I ever read” (Thomas Chalmers). Nicely formatted by CCEL. The epub and mobi files are copy-paste-publish files based on the web version.

The Heads of Some Sermons Preached at Finnick. (59 pages)
[pdf epub mobi txt web via EEBO]
Various sermons from Matthew:

Want to discuss something pertaining to William Guthrie? Leave a public comment below (subject to moderation), or send a private message to the webmaster.