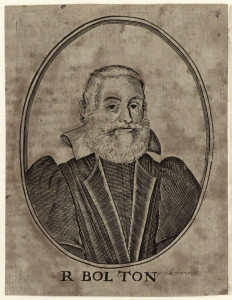 Robert Bolton (1572–1631) was an English clergyman and academic, noted as a preacher. He was born on Whit Sunday in Blackburn, Lancashire, the sixth son of Adam Bolton of Backhouse. He attended what is now Queen Elizabeth’s Grammar School, Blackburn, where his father was a founding governor, and was described as ‘the best scholar in the school’. At age 18, he was admitted in 1592 to Lincoln College, Oxford, where John Randall was. He was a gifted student, but the next year his father’s death caused him financial problems. Richard Brett supported him. He transferred to Brasenose College where there was a Lancashire fellowship available, and proceeded B.A. there on 2 December 1596; and was chosen in 1602 as a fellow of the college, taking his M.A. on 30 July. He was not particularly religious at this period, and was unimpressed with the preaching of William Perkins; Bolton said he thought Perkins was a “a barren empty fellow.”

On James I’s visit to the university in 1605, he was appointed to hold a disputation in the royal presence on natural philosophy, and his majesty was loud and frank in laudation of Bolton. He was also appointed lecturer in logic and moral and natural philosophy. A school friend named Anderton made a plan with Bolton to travel to a Catholic seminary in Flanders, but this fell through. Under the influence of Thomas Peacock of Brasenose he then proceeded B.D. in 1609, having decided to become a clergyman in the church of England. In 1610, now aged 37, he was presented by Sir Augustine Nicolls, a judge and occasional preacher, to the rectory of Broughton, Northamptonshire. Bolton died, after a lingering sickness of a quartan ague, on Saturday, 17 December 1631, being then in his sixtieth year. He was buried 19 December in the chancel of his own church St. Andrew’s, Broughton, where there is a monument. [More via Wikipedia]

The Works of Robert Bolton:

The Carnal Professor: Discovering the Woeful Slavery of a Man Guided By the Flesh. (284 pages)
[pdf web via Google Books]
Romans 8:13.  {Thanks, Thomas S. for helping to locate this!}

A Cordial for a Fainting Christian in the Time of Affliction. (19 pages)
Micah 7:8-9.

The Last Conflicts and Death of Mr. Thomas Peacock. (66 pages)

A Short and Private Discourse Between Mr. Bolton and One M.S. Concerning Usury. (77 pages)

Want to discuss something pertaining to Robert Bolton? Leave a public comment below (subject to moderation), or send a private message to the webmaster.