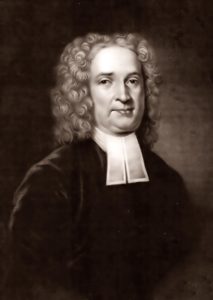 John Cotton (1584–1652) was an English clergyman and colonist. He was a principal figure among the New England Puritan ministers, who also included Thomas Hooker, Increase Mather (who became his son-in-law), John Davenport, and Thomas Shepard and John Norton, who wrote his first biography. Cotton was the grandfather of Cotton Mather, who was named after him.

Born in England, he was educated at Derby School, in buildings which are now the Derby Heritage Centre, and attended Trinity College, Cambridge and Emmanuel College, Cambridge, where he became a Fellow in 1606. He became a long-serving minister in the English town of Boston, Lincolnshire before his Puritanism and criticism of hierarchy drew the hostile attention of Church of England authorities. In 1633 William Laud was appointed Archbishop of Canterbury, and like numerous other Puritan nonconformist figures, Cotton soon came under his close “eye of scrutiny”. In the same year Cotton, his family, and a few local followers sailed for the Massachusetts Bay Colony.

The Brownist congregational movement within the Church of England had by this stage, in effect at least, become a separate church. Because of his early views on the primacy of congregational government, his was an important role in Puritan aspirations to become an example to help reform the English church. He is best known among other things for his initial defense of Anne Hutchinson early in her trials during the Antinomian crisis, during which she mentioned him with respect, though he turned strongly against her with the further course of the trial. He is also remembered for his role in the banishment of Roger Williams regarding the role of democracy and the separation of church and state in the Puritan theonomic society, both of which Williams tended to advocate. Cotton grew still more conservative in his views with the years but always retained the estimation of his community.

He was invited to attend the Westminster Assembly of Divines. He was keen to go, though Winthrop said that he couldn’t see the point of “travelling 3,000 miles to agree with three men.” Cotton’s desire to attend changed with the unfolding events of the First English Civil War, and he came to believe that he could be more effective in influencing the Assembly through his writings. He died in Boston, Massachusetts on December 23, 1652; his cause of death is unknown. [More via Wikipedia] [Norton’s Memoir of John Cotton is here and here] [McClure’s Life of John Cotton is here and here] [Walker’s Lecture on John Cotton is here]

The Works of John Cotton:

An Abstract of the Laws of New England. (18 pages)
[pdf epub web via Google Books] [web txt via CRTA]

A Brief Exposition of the Whole Book of Canticles. (64 pages)
[pdf epub mobi txt web via Internet Archive]
The non-pdf files include Muffet’s commentary on Proverbs, and Cotton’s commentary on Ecclesiastes.
[pdf via Quinta Press] This newer reprint also includes the commentary on Eccelsiastes.

A Brief Exposition, With Practical Observations, Upon the Whole Book of Ecclesiastes. (139 pages)
[pdf epub mobi txt web via Internet Archive]
The non-pdf files include Muffet’s commentary on Proverbs, and Cotton’s commentary on Song of Solomon.
[pdf via Quinta Press] This newer reprint also includes the commentary on Canticles.

An Exposition Upon the Thirteenth Chapter of the Revelation. (277 pages)
[pdf epub mobi txt web via Internet Archive]
Thank you Amos C. for helping to locate this!

The Correspondence of John Cotton.
{Can you help us locate this?} {preview}

The Covenant of God’s Free Grace. (47 pages)
[pdf via Quinta Press]
or, The Saints’ Comforts Against Personal and Domestical Infirmities. 2 Samuel 23:5.

God’s Mercy Mixed with His Justice. (135 pages)
Containing the Following:

{Can you help us locate this?} {preview}

The Grounds and Ends of the Baptism of the Children of the Faithful Opened. (223 pages)
[pdf via Quinta Press]

Of the Holiness of Church Members. (105 pages)
[pdf via Quinta Press]

The Keys of the Kingdom of Heaven. (111 pages)
[pdf epub mobi txt web via Internet Archive]

The Liberty of Conscience in Matters of Religion. (16 pages)
[pdf via Quinta Press]

The Pouring Out of the Seven Vials. (190 pages)
[pdf epub mobi txt web via Internet Archive]
An exposition of Revelation 16:1-21.

A Practical Commentary or Exposition Upon the First Epistle of John. (643 pages)
[pdf via Quinta Press]

The True Constitution of a Particular Visible Church. (16 pages)
[pdf via Quinta Press]

The Way of Life (or, God’s Way and Course). (422 pages)
[pdf web via Google Books]
[pdf via Quinta Press]
Containing the following:

The Way of Congregational Churches Cleared in Two Treatises. (164 pages)
{Can you help us locate this?} {preview}

The Way of the Churches of Christ in New England. (129 pages)
[pdf via Quinta Press]

Want to discuss something pertaining to John Cotton? Leave a public comment below (subject to moderation), or send a private message to the webmaster.