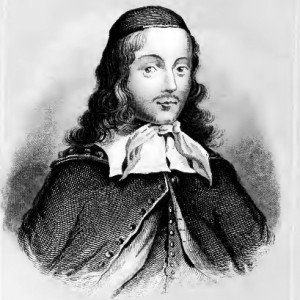 James Janeway (c.1636–1674) was a Puritan minister and author who, after John Bunyan, had the widest and longest popularity as the author of works read by English-speaking children. Janeway was born at Lilley, in Hertfordshire, the son of William Janeway, a minister of Kershall, at the end of 1636. He was educated at Christ Church, Oxford, graduating with a B.A. and spent time as a private tutor in a home, like many of the Puritans. He is listed as one of the “ejected” or “silenced” ministers by the Act of Uniformity 1662. The first evidence that he functioned as a non-conformist preacher is from the year 1665 at the time of the Great Plague of London. He was then witness to the second great national calamity in the Great Fire of London in 1666.

In 1672 his congregation built a large meeting house for him near London at Rotherhithe, where it is said that he had a very numerous auditory, and a great reformation was wrought amongst many.

But Janeway’s popularity caused the Church of England to threaten to have him shot. This was actually attempted on at least two occasions, on one of which a bullet pierced his hat but missed his body. Soldiers destroyed the building in which he preached, but his congregation simply built another, larger one big enough for all those who came to hear him preach.

Janeway was afflicted with melancholy, contracted tuberculosis, and died in his 38th year. All of his five brothers died of tuberculosis before the age of 40. He was buried in St Mary Aldermanbury next to his father.

The book for which Janeway is most known is A Token for Children, in which he collected personal accounts of the conversions of a number of children under his pastoral care, and published it. In the introduction, Janeway asks, “Are the souls of your children of no value? They are not too little to die… not too little to go to hell… not too little to serve their great Master, not too little to go to heaven.” It became an effective evangelistic tool, and was the most widely read book in nurseries in England next to the Bible and Pilgrim’s Progress by John Bunyan. The New England preacher Cotton Mather regarded that book so highly that he wrote his own version of it and called it “A Token for the Children of New England”.

Janeway also wrote Heaven Upon Earth: Jesus, The Best Friend in the Worst Times. He was among the signers of the 1673 Puritan Preface to the Scottish Metrical Psalms and contributed one of the Cripplegate sermons: “Duties of Masters and Servants”.

His influence on Puritan thought lasted long after his death. Charles Haddon Spurgeon referred to Janeway’s works in his sermons on many occasions in the late 1800s. [More via Wikipedia][Biographical sketch of the Janeway family, a preface from Heaven Upon Earth]

The Works of James Janeway:

Death Unstung. (93 pages)
[pdf web via Google Books] – Thanks to Thomas S. for finding this!
Revelation 14:13. A sermon preached at the funeral of Thomas Mowsley, an apothecary who died July 1669.

Duties of Masters and Servants. (29 pages)
[pdf web via Google Books]
A sermon on Ephesians 6:5-9 which was preached at the Morning Exercises at Cripplegate.

Mr. James Janeway’s Legacy to His Friends (or, A Token for Mariners). (143 pages)
[txt web via EEBO-TCP]
“Containing twenty-seven famous instances of God’s providence in and about sea dangers and deliverances, with the names of several that were eye-witnesses to many of them.” Appended with a sermon on Acts 27:18-20.

Mr. Janeway’s Sayings Not Long Before His Death. (1 page)
{Can you help me find this?}

The Saints’ Encouragement to Diligence in Christ’s Service. (137 pages)
[pdf epub mobi txt web via Internet Archive]
2 Peter 1:11. Appended with “An Account of Some of the Death-Bed Experiences of Mrs. B.”

A Token for Children. (116 pages)
[pdf epub mobi txt web via Internet Archive]
“Being an exact account of the conversion, holy and exemplary lives, and joyful deaths of several young children.”

Want to discuss something pertaining to James Janeway? Leave a public comment below (subject to moderation), or send a private message to the webmaster.