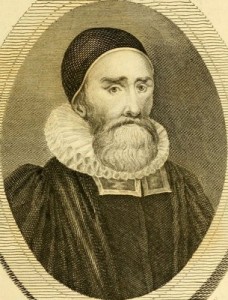 William Twisse (1578-1646) was born at Spenham-Land, near Newbury, in Berkshire, and was educated first at Winchester school, then in New College, Oxford, where he was chosen fellow. He spent sixteen years at the university; and, by a most intense application, obtained an extraordinary knowledge of logic, philosophy, and divinity. His profound erudition appeared in his public lectures and learned disputations, but especially in correcting the works of the celebrated Bradwardine, then published by Sir Henry Savile. He was an admired and popular preacher, eagerly followed both by the collegians and townsmen.

His uncommon fame reached the court of King James, who chose him to be chaplain to Lady Elizabeth, then about to leave her native country and go to the Palatine. He cheerfully complied with the appointment, and accompanied the pious young princess to the foreign court; and, to moderate her grief, and administer comfort to her troubled mind, upon her painful separation from her friends, he expounded some portion of Scripture to her every day. He dwelt much upon the great uncertainty of life, and the importance of a suitable preparation for death; and, from his appropriate instructions and admonitions, she derived that signal advantage by which she was enabled to endure the greatest adversity with undaunted courage.

Upon his return, he became curate of Newbury where, by his exemplary life and useful preaching, he gained a most distinguished reputation. In this retired situation, which was exactly suited to his wishes, he lived in great peace and comfort; and being secluded from the world, his time was wholly devoted to his studies and the spiritual advantage of his flock. He never sought after worldly riches or aspired after ecclesiastical preferment, but modestly refused them when they were offered. No man ever sought more industriously to obtain ecclesiastical promotion than he sought to avoid it. Hence, when he was offered the provostship of Winchester college, and was warmly entreated to accept it, he as warmly contended against it, though it was a post of considerable pecuniary interest. He preferred his studies and the ministry of the Word, to any idle or honourable post; and worldly interest had but little influence on his mind.

Upon the publication of the Book of Sports, our learned divine refused to read it, and ventured to declare his opinion decidedly against it. Nevertheless he escaped better than many of his brethren, who, for so doing, were suspended from their ministry, driven out of the kingdom, or cast into prison. His refusal to read the book did not pass unnoticed at court, but when King James heard of it, he commanded the bishops not to molest him. His majesty, indeed, very well knew that though Dr. Twisse lived in low circumstances and in an obscure situation, his fame was so great in all the reformed churches that their lordships could do nothing against him which would not be a public reproach to themselves.

He obtained uncommon celebrity from the books which he published, especially upon points of controversy. Here his talents and erudition were employed upon his favourite subjects without restraint, and with extraordinary success. Among his antagonists were Dr. Thomas Jackson, Mr. Henry Mason, and Dr. Thomas Godwin, who was a person of great learning, especially in antiquities; but is said to have been more fit to instruct grammarians than to contend with a logician like Dr. Twisse. He next encountered Mr. John Goodwin, the celebrated advocate for Arminianism, whom he is said to have refuted with great learning and judgment. His next contest was with Mr. John Cotton, a divine whom he highly esteemed, and whom he treated with great gentleness. He learnedly refuted Dr. Potter’s “Survey of the New Platform of Predestination.” He treated Dr. Heylin according to his deserts, in defence of the morality of the Sabbath. He also successfully contended with the famous Arminius and others in defence of the doctrines of grace. His answers to Dr. Jackson and Arminius, and his Riches of God’s Love, when first published, were all suppressed by the arbitrary appointment of Bishop Laud.

In the year 1640, Dr. Twisse was chosen to assist the committee of accommodation appointed by the House of Lords to consider the innovations introduced into the church, and to promote a more pure reformation. In the year 1643, he was nominated, by order of Parliament as prolocutor to the Assembly of Divines. On account of his great modesty, he repeatedly declined the appointment, but was at length prevailed upon to accept the office. The learned assembly was opened July 1, 1643, when Dr. Twisse preached to both houses of parliament, in Henry the seventh’s chapel. “In his sermon,” says Fuller, “he exhorted his learned auditory to a faithful discharge of their duty, and to promote the glory of God and the honour of his church; but he was sorry that they lacked the royal assent. He hoped, however, that in due time it might be obtained, and that a happy union would be procured between the king and parliament.”

Dr. Twisse, on account of his age and manifold infirmities, was not able to attend upon the concerns of the assembly; but, in a few months, was taken ill, falling down in the pulpit to rise no more. He had been long grieved to behold the disagreement between the King and Parliament, which, he said, would prove fatal to both; and he often wished that the fire of contention might be extinguished, though it were at the price of his own blood. When he fell down in the pulpit, he was carried to his lodgings and laid upon his bed, where he languished about a year. During his long illness, multitudes of persons resorted to him, who witnessed his exemplary faith and patience. In the civil wars, he had been driven from his curacy and the people of his charge, at Newbury, and deprived of all his property by the royal forces; so that, in the time of his sickness, when certain persons were sent from the assembly to visit him, they reported that “he was very sick, and in great straits.”

The Parliament, having taken his case into consideration, passed an order December 4, 1645, for one hundred pounds to be given him out of the public treasury. Nearly the last words that Dr.Twisse uttered, were, “I shall at length have leisure enough to follow my studies to all eternity,” and died July 20, 1646. The whole House of Commons, and the Assembly ofDivines paid their last respects to his memory by following, in one sorrowful procession, his mortal remains to the grave. Dr. Robert Harris preached his funeral sermon from Joshua 1:2, “Moses my servant is dead.” He was buried in Westminster Abbey, where his body quietly rested until the Restoration, when King Charles ordered his bones to be dug up, together with the bodies of many other persons eminent in church and state, and thrown into a pit digged on purpose in St. Margaret’s church-yard. Though Dr. Twisse died in necessitous circumstances, Parliament after his death voted a thousand pounds to be given to his children, out of the public treasury. But on account of the national confusions, it is doubtful whether it was ever paid.

Mr. Clark says, “he was much admired for his great learning, subtle wit, exact judgment, great integrity, pleasing behaviour, and his exemplary modesty, piety, humility and self-denial.” Fuller denominates him “a divine of great abilities, learning, piety, and moderation.” Wood says, “his plain preaching was esteemed good; his solid disputations were accounted better; but his pious life was reckoned best of all.” The most learned of his adversaries confessed that there was nothing extant more accurate and full upon the Arminian controversy than what is contained in his works. All writers against Arminianism have made honourable mention of his works, and have acknowledged him to have been the mightiest man in those controversies that the age produced. [from The Lives of the Puritans, by Benjamin Brook] [See also William Young’s excellent biographical sketch]

The Works of William Twisse:

A Brief Catechismal Exposition. (62 pages)
{pdf via Supralapsarian}
A catechism on the sacraments, the Lord’s Prayer, the Ten Commandments, and the Apostles’ Creed.

The Christian Sabbath Defended. (246 pages)
Can you help us find this?

A Discovery of D. Jackson’s Vanity. (728 pages)
{pdf via Supralapsarian}

The Doctrine of the Synod of Dort and Arles, Reduced to the Practice. (198 pages)
{pdf via Supralapsarian}

The Doubting Conscience Resolved. (166 pages)
{pdf via Supralapsarian}
In which it is shown that the Holy Scriptures form the foundation upon which the church is built, not the decrees of the Pope.

An Examination of Mr. Cotton’s Analysis of The Ninth Chapter of Romans. (280 pages)
{pdf via Supralapsarian}
or, A Treatise of Mr. Cotton’s Clearing Certain Doubts Concerning Predestination.

The Five Points of Grace and of Predestination.
{epub mobi txt web via Grace Online Library}

Of the Morality of the Fourth Commandment. (298 pages)
{pdf epub mobi txt web via Internet Archive}

The Riches of God’s Love. (592 pages)
{pdf via Mount Zion Primitive Baptist Church}
The definitive treatment of supralapsarianism (the doctrine that God planned in advance all of redemptive history before creating the world), the full title is The Riches of God’s Grace unto Vessels of Mercy, Consistent with His Absolute Hatred or Reprobation on the Vessels of Wrath.

The Scripture’s Sufficiency to Determine all Matters of Faith Made Good Against the Papist. (95 pages)
{pdf via Supralapsarian}