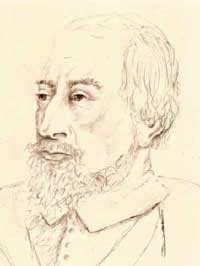 Thomas Shepard (1605-1649) was an American Puritan minister and a significant figure in early colonial New England. Shepard was born in Towcester, Northamptonshire. His devout mother died when he was four and he lived a difficult life under his stepmother. His father died when he reached ten, at which point he lived with his grandparents and later an older brother, whom he held in high and grateful regard. A schoolmaster ignited in him a scholarly interest, which ultimately led to entry into Emmanuel College in Cambridge University at the age of fifteen. He accounts in his autobiography that he lived a dissatisfied and dissolute life, which led him to pray out in a nearby field, at which point he underwent the beginnings of a conversion experience.

In 1627 he became assistant schoolmaster at Earls Colne Grammar School in Earls Colne, Essex. He became a minister whose sermons and Puritan ways drew the ire of Church of England Archbishop William Laud, and he was forbidden to preach. Following the death of his eldest son, he left England in 1635 with wife and younger son on a difficult voyage for Massachusetts in colonial America. His wife died thereafter, as did his second wife and other children, though he framed these experiences, if not without difficulty, into the perspective of his theology.

Shepard died of quinsy (peritonsillar abscess), a complication of tonsillitis, at the age of 44. [More via Wikipedia]

The [Complete] Works of Thomas Shepard:

The Works of Thomas Shepard, Volume 1. (559 pages)
{pdf epub mobi txt web via Google Books and Internet Archive}
Includes a lengthy biographic preface, The Sincere Convert, The Sound Believer, and a few smaller treatises. {I will break these up as time permits.}

The Works of Thomas Shepard, Volume 3. (561 pages)
{pdf epub mobi txt web via Google Books and Internet Archive}
Mostly contains Theses Sabbitacea, also “Ineffectual Hearing of the Word” and other shorter works. {I will break these up as time permits.}