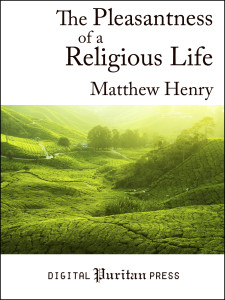 The Pleasantness of a Religious Life was Matthew Henry’s final literary work; it was in the process of being printed when he died in 1714. In it he examines the great joys of the Christian life by expounding upon Proverbs 3:17, “[Wisdom’s] ways are ways of pleasantness, and all her paths are peace.”

Pastor Henry also unmasks the counterfeit pleasures this world attempts to use to cheat us out of pleasures that are both satisfying indeed and eternally durable—for the world’s sensual pleasures are bland to those who have tasted the sweetness of the Lord, and felt the lightness and rest which is to be found under his yoke.

Far from a copy-paste-publish e-book, this edition has been painstakingly edited into an entirely new text which has been gently modernized for today’s reader, while still retaining the flavor and character of the original manuscript. To aid the reader, over four hundred Scripture references (in the ESV) have been embedded into the text as hyperlinked end-notes (no internet connection is required).