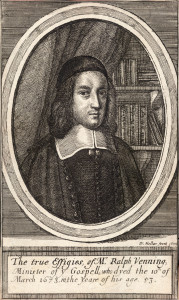 Ralph Venning (c.1622-1674) was an English nonconformist Christian. The son of Francis and Joan Venning, he was born in Devon, perhaps at Kingsteignton, about 1621. He was the first convert of George Hughes, the puritan vicar of Tavistock. He was educated at Emmanuel College, Cambridge, where he was admitted as a sizar on 1 April 1643, graduated B.A. 1646, and proceeded M.A. 1650.

He held a lectureship at St. Olave’s Church in the parish of Southwark St. Olave, where he had a great repute as a preacher of charity sermons. Ejected by the Uniformity Act 1662, he became a colleague to Robert Bragge, pastor of an independent congregation at Pewterers’ Hall, Lime Street, Fenchurch Street, and held this charge till his death.

He died on 10 March 1674, in his fifty-third year, and was buried in Bunhill Fields. An Elegy on his death was printed on a broadsheet in March 1674. He married Hannah, widow of John Cope of London, and left a son, and a daughter Hannah. [more from Wikipedia]

The Works of Ralph Venning:

Mysteries and Revelations. (448 pages)
{pdf web via Google Books}
Subtitled, “The Explication and Application of Several Extra-Essential and Borrowed Names, Allusions, and Metaphors in the Scripture”. Contains the following:

Sin, the Plague of Plagues. (162 pages) -popular-
{pdf via PreachTheWord} {web via GospelTruth}
Also known as The Sinfulness of Sin.

A Warning to Backsliders (68 pages)
{web via Regent College}
A sermon on Revelation 2:5.