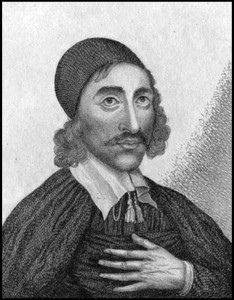 Obadiah Sedgwick (c.1600-1658) was an English clergyman of Presbyterian views, a member of the Westminster Assembly.

He was tutor (1626) to Sir Matthew Hale. Having taken orders, he became chaplain to Horace Vere, 1st Baron Vere of Tilbury, whom he accompanied to the Low Countries. Returning to Oxford, he commenced B.D. on 16 January 1630. His first preferment (1630) in the church was as lecturer at St. Mildred’s, Bread Street, London, where his Puritanism got him into trouble. On 6 July 1639 he was presented by Robert Rich, 2nd Earl of Warwick, to the vicarage of Coggeshall, Essex, in succession to John Dod.

On the opening of the Long Parliament he regained his lectureship at St. Mildred’s, and became known as a vigorous preacher against episcopacy. In the autumn of 1642 he was chaplain to the regiment of foot raised by Denzil Holles. He was a member of the Westminster Assembly (1643), and in the same year was appointed a licenser of the press. On 6 October 1643 he spoke at the Guildhall in favour of the league with Scotland for the prosecution of the war, and his speech was published in Foure Speeches, 1646. In a sermon of September 1644 he preached for ‘cutting off delinquents.’ He held for a short time the rectory of St Andrew’s, Holborn, on the sequestration (13 December 1645) of John Hacket; but next year (before May 1646) he was appointed to the rectory of St. Paul’s, Covent Garden, and resigned Coggeshall where John Owen succeeded him (18 August).

He was a member of the eleventh London classis in the parliamentary presbyterian system; but also on 20 March 1654 he was appointed one of Oliver Cromwell’s ‘triers,’ and in August of the same year was a clerical assistant to the ‘expurgators.’ His health failing, he resigned St Paul’s in 1656, and was succeeded by his son-in-law, Thomas Manton. He was a man of property, being lord of the manor of Ashmansworth, Hampshire. Retiring to Marlborough, he died there at the beginning of January 1658, and was buried near his father, in the chancel of Ogbourne St. Andrew. By his wife Priscilla he had a son Robert, baptised at Coggeshall on 19 October 1641, who was a frequent preacher before parliament. [More via Wikipedia]

The Works of Obadiah Sedgwick:

An Ark Against a Deluge, or, Safety in Dangerous Times. (Can you help find this?)

The Best and Worst Malignant. (Can you help find this?)

A Catechism. (Can you help find this?)

Christ’s Counsel to His Languishing Church of Sardis. (282 pages) – NEW
or, The Dying and Decaying Christian, With the Means and Helps of His Recovery and Strengthening. Revelation 3:2-3.
[pdf web via Google Books]
– Thanks to Thomas S. for locating this!

The Doctrine of Providence. Matthew 10:29-31. (82 pages)
[pdf epub mobi txt web via Internet Archive]
Originally appeared as an appendix to The Shepherd of Israel (see below).

Haman’s Vanity. Esther 9:1. (21 pages)
{pdf via Digital Puritan}
A sermon preached before the House of Commons on the day of their public thanksgiving, June 15, 1643. An updated, easier-to-read version appears in The Digital Puritan, IV:1.

Military Discipline for the Christian Soldier. (Can you help find this?)

The Riches of Grace. (Can you help find this?)

The Shepherd of Israel, or, God’s Pastoral Care over His People. (389 pages) [pdf epub mobi txt web via Internet Archive]
An exposition of Psalm 23. Also includes “The Doctrine of Providence”

Speech in Guildhall. (Can you help find this?)

Synopsis of Christianity. (Can you help find this?)

The Tribunal of Justice. (Can you help find this?)