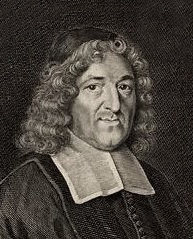 Matthew Mead (1629-1699) was born in 1629 in Bedfordshire. He studied at Eton College, and shortly thereafter was elected to King’s College in Cambridge. He resigned two years later “to avoid expulsion for refusing to take the engagement to the Commonwealth.”

He married in 1655 and began delivering the morning lecture at St. Dunstan and All Saints in Stepney. He identified with the Independents during Oliver Cromwell’s rule, and was accordingly appointed curate of New Chapel in 1658, a position which he lost upon the Restoration. In 1659 he became lecturer at St. Bride’s.

In 1661 Mead preached a series of seven sermons which were later turned into the manuscript for his most enduring work,The Almost Christian Discovered. Shortly after it was printed, he was ejected from his lectureship because of his nonconformity. His final sermon, “The Pastor’s Valediction” (1 Corinthians 1:3), encouraged his hearers to stay the course and be true to ideals, rather than conform.

Mead had a close working relationship with William Greenhill, first as his assistant, then his assitant pastor, then his successor, at Stepney. It was as pastor over this congregation that Mead spent the majority of his career, preaching there from 1671 until his death in 1699. During this time the Stepney congregation was reported to be the largest congregation in London.

He strongly supported attempts at reconciliation between Presbyterians and Congregationalists, as led by John Howe in 1690. Mead preached a popular sermon, “Two Sticks Made One” from Ezekiel 37:19, teaching that needless denominationalism was dishonouring to Christ.

He died in 1699, at the age of seventy. He was the father of thirteen children. His good friend John Howe preached his funeral sermon, calling him “a very reverend and most laborious servant of Christ.” [More via Wikipedia]

The Works of Matthew Mead:

Original Sermons on the Jews, and on Falling into the Hands of the Living God. Also known as The Sermons of Matthew Mead. Containing five sermons on the restoration of the Jews (Ezekiel 37), twelve sermons from Hebrews 10:31, and his farewell sermon, “The Pastor’s Valediction” (1 Corinthians 1:3).

The Power of Grace in Weaning the Heart from the World. (65 pages) Psalm 131:1. {pdf epub web via Google Books} {web via GraceGems–an excerpt?}
This title was originally appended to “A Name in Heaven the Truest Ground of Joy”.

Solomon’s Prescription for the Removal of the Pestilence. (88 pages) 1 Kings 8:37-39.
{web via EEBO}
Also titled, The Discovery of the Plague of our Hearts, in Order to the Healing of that in our Flesh.

Two Sticks Made One (or, The Excellency of Unity). (39 pages) Ezekiel 37:19. {pdf epub web via Google Books}
A sermon delivered in 1691, to encourage reconciliation among Presbyterians and Congregationalists by showing that needless denominationalism is harmful to Christ’s honour.

The Vision of the Wheels.