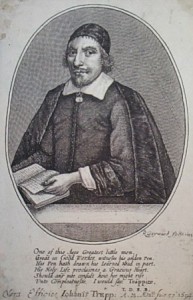 John Trapp (1601-1669) was an English Puritan. His large five-volume commentary is still read today and is known for its pithy statements and quotable prose. His volumes are quoted frequently by other religious writers, including Charles Spurgeon, who says of his works:

“Would it be possible to eulogize too much the incomparably sententious and suggestive folios of John Trapp? Trapp will be most valuable to men of discernment, to thoughtful men, to men who only want a start in a line of thought, and are then able to run alone.

Trapp excels in witty stories on the one hand, and learned allusions on the other. You will not thoroughly enjoy him unless you can turn to the original, and yet a mere dunce at classics will prize him. His writings remind me of himself: he was a pastor, hence his holy practical remarks; he was the head of a public school, and everywhere we see his profound scholarship; he was for some time amid the guns and drums of a parliamentary garrison, and he gossips and tells queer anecdotes like a man used to a soldier’s life; yet withal, he comments as if he had been nothing else but a commentator all his days. Trapp is my especial companion and treasure; I can read him when I am too weary for anything else.

Trapp is salt, pepper, mustard, vinegar, and all the other condiments. Put him on the table when you study, and when you have your dish ready, use him by way of spicing the whole thing. Yes, gentlemen, read Trapp certainly, and if you catch the infection of his consecrated humor, so much the better for your hearers.”

Ruth Graham, the daughter of Ruth Bell Graham, said that John Trapp, along with C.S. Lewis and George MacDonald, was one of her mother’s three favorite sources for quotations.

Trapp studied at the Free School in Worcester and then at Christ Church, Oxford (B.A., 1622; M.A., 1624). He became usher of the free school of Stratford-upon-Avon in 1622 and its headmaster in 1624, and was made preacher at Luddington, near Stratford, before becoming vicar of Weston-on-Avon in Gloucestershire. He sided with parliament in the English Civil War and was arrested for a short time. He took the covenant of 1643 and acted as chaplain to the parliamentary soldiers in Stratford for two years. He served as rector of Welford-on-Avon in Gloucestershire between 1646 and 1660 and again as vicar of Weston from 1660 until his death in 1669. [more from Wikipedia]

The Complete Works of John Trapp:

Commentary on the Old Testament:
Made up of the following volumes:

The volume on the minor prophets includes the treatise “The Righteous Man’s Recompense” (also below as a separate title).

Commentary on the New Testament. (1,136 pages) [pdf via Supralapsarian]
The one-volume commentary (listed above) also includes A Decade of Common Places (also available below as a separate title).
Made up of the following volumes:

God’s Love-Tokens. (294 pages) [pdf via Supralapsarian]
Written in 1637 after the death of four of his children.

The Righteous Man’s Recompense. (164 pages) [pdf via Digital Puritan]
Based on Malachi 3:16-18. Subtitled “A True Christian Characterized and Encouraged.”

Theologia Theologiae (or, The True Treasure). (400 pages) [pdf via Supralapsarian]
Based upon Hebrews 1:1-3.