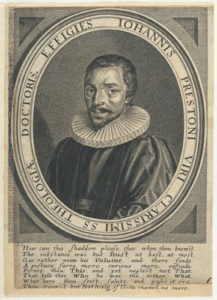 John Preston (1587-1628) was an English Puritan minister of the church, and master of Emmanuel College, Cambridge. He was the son of Thomas Preston, a farmer, being born at Upper Heyford in the parish of Bugbrook, Northamptonshire. He was baptised at Bugbrook church on 27 October 1587. His mother’s maiden name was Alice Marsh. Her maternal uncle, Creswell, was mayor of Northampton. Being rich and childless, he adopted Preston, placing him at the Northampton Grammar School, and subsequently with a Bedfordshire clergyman named Guest for instruction in Greek. He matriculated at King’s College, Cambridge, on 5 July 1604. He later migrated to Queens’ College.

Creswell had left him the reversion of some landed property, and he thought of a diplomatic career. With this view he entered into treaty with a merchant who arranged for his spending some time in Paris, but on this merchant’s death the arrangement fell through. Preston then turned to the study of philosophy. From philosophy he turned to medicine and studied astrology [astonomy], then valued as a handmaid to therapeutics.

About 1611, the year in which he commenced M.A., he heard a sermon at St. Mary’s from John Cotton, then fellow of Emmanuel, which opened to him a new career. Cotton had a great reputation as an elegant preacher; but this was a plain evangelical sermon, and disappointed his audience. He returned to his rooms, somewhat mortified by his reception, when Preston knocked at his door, and that close religious friendship began which permanently influenced the lives of both. Preston now gave himself to the study of scholastic divinity.

During the visit of James I to Cambridge in March 1615, Preston distinguished himself as a disputant. But Preston had by this time given up his early ambition; though he said little of his purpose, his mind was set on the ministry, and he was reading modern divinity, especially Calvin.

His coolness in the direction of court favour gave rise to suspicions of his Puritan leanings. Meanwhile, Preston’s health was suffering, and he was troubled with insomnia. Twice he applied for advice (once in disguise) to William Butler of Clare Hall, a successful empiric. Butler only told him to take tobacco; on doing so he found his remedy in ‘this hot copious fume.’

Preston had now taken orders, and become dean and catechist of Queens’. He began a course of sermons which were to form a body of divinity. Complaints were made to the vice-chancellor that the college chapel was crowded with scholars from other colleges and townsmen. An order was then issued excluding all but members of the college.

He was summoned to preach before the king at Finchingbrook, near Royston, Cambridgeshire. James highly approved of his arguments against the Arminians. He was proposed as a royal chaplain by James Hamilton, 2nd Duke of Abercorn, but James thought this premature.

Preston’s kinsman, Sir Ralph Freeman, who had married a relative of George Villiers, 1st Duke of Buckingham, now took occasion to represent to Buckingham that he might make friends of the Puritans by promoting Preston. Through Buckingham’s interest he was made chaplain-in-ordinary to Prince Charles. He took the degree of Bachelor of Divinity in 1620.

In February 1622 John Donne resigned the preachership at Lincoln’s Inn, and the benchers elected Preston as his successor. A new chapel, finished soon after his appointment, gave accommodation to the large numbers who flocked to hear him.

In 1623 he was made D.D. by royal mandate. According to Ball, he had been selected by Buckingham to accompany Arthur Chichester, 1st Baron Chichester, on a projected embassy to Germany, and was, on this occasion, made D.D.

Preston was anxious for opportunities of preaching at Cambridge, and listened to proposals in 1624 for putting him into a vacant lectureship at Trinity Church. The matter was referred to James I, who wanted to keep Preston out of a Cambridge pulpit, and, through Edward Conway, offered him any other preferment at his choice. It was then that Buckingham told Preston he might have the bishopric of Gloucester, vacant by the death of Miles Smith. But Preston, backed by the townsmen, maintained his ground and got the lectureship.

He was in attendance as Charles’s chaplain at Theobalds on Sunday, 27 March 1625, when James I died, and accompanied Charles and Buckingham to Whitehall, where the public proclamation of Charles’s accession was made. For the moment it seemed as if Preston was destined to play an important part in politics. He exerted influence on behalf of his Puritan friends, obtaining a general preaching license (20 June 1625) for Arthur Hildersam. But he found his plans counteracted by William Laud.

Preston’s health deteriorated in the years that followed. His lungs were diseased; he fell into a rapid decline and died at a friend’s house at Preston-Capes, Northamptonshire, on Sunday, 20 July 1628. When he lay dying, they asked him if he feared death, now that it was so close. “No,” whispered Preston; “I shall change my place, but I shall not change my company.” He was buried on 28 July in Fawsley church. There is no monument to his memory. [more from Wikipedia]

The Works of John Preston:

This volume is also appended with the following:

The Golden Scepter Held Forth to the Humble. (1064 pages)
{pdf epub mobi txt web via Internet Archive}
A treatise on 2 Chronicles 7:14.

Life Eternal. (442 pages)
{pdf epub mobi txt web via Internet Archive}
Also known as “A treatise of the knowledge of the divine essence and attributes.” Eighteen sermons on various texts.

Mount Ebal, or, A Heavenly Treatise of Divine Love. (1268 pages)
{pdf epub mobi txt web via Internet Archive}
Showing the equity and necessity of his being accursed that loves not the Lord Jesus Christ, together with the motives, means, and marks of our love towards him. A brief treatise on 1 Corinthians 16:22. Appended with the following:

The New Covenant. (650 pages)
{pdf epub mobi txt web via Internet Archive}
Also titled, “The Saint’s Portion: A treatise unfolding the all-sufficiency of God, man’s uprightness, and the covenant of grace.” Fourteen sermons on Genesis 17:1-2 and four sermons on Ecclesiastes 9:1-2, 11-12.