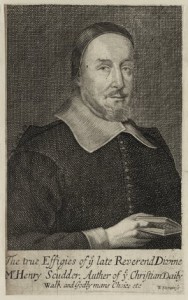 Henry Scudder (c.1585-1652) was an English clergyman of presbyterian views, known as a devotional writer, and member of the Westminster Assembly.

He was a graduate of Christ’s College, Cambridge, with an M.A. from 1606. He was minister at Drayton in Oxfordshire 1607-19, and in 1633 was presented by the king to the living of Collingbourne-Ducis, near Marlborough, Wiltshire. In June 1643 he was summoned to the Westminster Assembly of divines. When in June 1645 an order came from the House of Commons to pray for the forces, Scudder was one of the four preachers assigned to Aldgate. He was minister at the London church of St Mildred Poultry in 1645-6. On 6 April 1647 he reported on the some of the proofs of the Westminster Confession of Faith, and on 9 February 1648 his name was added to the Assembly’s committee for the scriptures.

Scudder preached before the House of Commons in October 1644, on a fast day, at St. Margaret’s, Westminster, and his sermon was printed by request of the house. He died before the Restoration, and his successor at Collingbourne-Ducis was instituted in 1660. He was buried in the church there, in a tomb that has been removed. He married Elizabeth, daughter of George Hunt, for fifty years rector of Collingbourne-Ducis. She died when little over twenty. Her sister married William Whately, Scudder’s fellow-student at Christ’s College, and subsequently vicar of Banbury, whose life Scudder wrote in 1639-40. [from Wikipedia]

The Works of Henry Scudder:

God’s Warning to England by the Voice of his Rod.
Can you help me find this?

A Key of Heaven: The Lord’s Prayer Opened and Applied.
Can you help me find this?