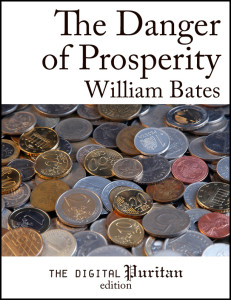 The Danger of Prosperity
William Bates

William Bates (1625-1699) was a well-liked and highly esteemed Puritan pastor who played a key role in the restoration of King Charles II. Appointed a royal chaplain, he preached at St. Dunstan-in-the-West until forced out by the Great Ejection of 1662. Eventually he settled over a dissenting congregation at Hackney near London, where he spent the remainder of his life in fruitful ministry.

In The Danger of Prosperity, Bates insightfully teaches Christians how wealth, honor, and fame often contribute to the downfall of the unwary. He challenges his readers with the tender encouragement of a shepherd to carefully consider the ways in which the abuse of prosperity is both deadly and destructive. He provides numerous helps that Christians who enjoy God’s hand of blessing can use to avoid its sinful abuse and improve it to God’s glory and their eternal advantage.

This classic work has been carefully prepared for the enjoyment of a new generation of Christian readers. Previously available only as part of a “complete works” lithograph from the early 19th century, this edition has been carefully prepared by the editor of The Digital Puritan. Includes a biographical preface by James Marsh.
Digital and Paperback, 116 pages. $8.99/$2.99

Available in paperback and for Kindle, Nook, Apple Devices, Google Play, Kobo, and other e-readers.