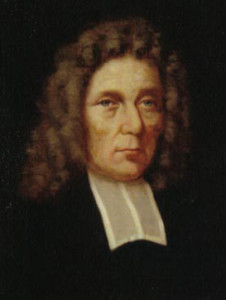 Benjamin Keach (1640-1704) was a Particular Baptist preacher in London whose name was given to Keach’s Catechism.

Originally from Buckinghamshire, Keach worked as a tailor during his early years. He was baptized at the age of 15 and began preaching at 18. He was the minister of the congregation at Winslow before moving in 1668 to the church at Horse-lie-down, Southwark where he remained for 36 years as pastor (1668-1704). This congregation later became the New Park Street Church and then moved to the Metropolitan Tabernacle under the pastorship of Charles Spurgeon. It was as representative of this church that Keach went to the 1689 General Assembly and subscribed the 1689 London Baptist Confession of Faith. Keach was one of the seven men who sent out the invitation to the 1689 General Assembly. The signing of the confession was no mute doctrinal assent on the part of the church, for in the same year they entered into a Solemn Covenant which reflected, at the practical and congregational level, some of the doctrines of the confession. There was a secession from Horse-lie-down in 1673 and the Old Kent Road congregation was formed. Spurgeon later republished the 1689 London Baptist Confession of Faith for use in the congregation.

Keach wrote 43 works, of which his “Parables and Metaphors of Scripture” may be the best known. He wrote a work entitled “The Child’s Instructor” which immediately brought him under persecution and he was fined and pilloried in 1664. He is attributed with the writing of a catechism commonly known as “Keach’s Catechism”, although it is most likely that the original was compiled by William Collins.

“On the pillory at Aylesbury Mr. Keach defended himself and the truth with great boldness. The jailer frequently interrupted him, and finally the sheriff himself threatened to have him gagged. The people, contrary to custom, had no words of mockery for the good, persecuted minister, and no offensive missile was hurled at him. An Episcopal minister who ventured to assail Mr. Keach in the pillory was immediately reproached by the people with the ungodliness of his own life, and his voice was drowned in laughter. At Winslow, where he lived, he suffered the same shameful penalty, and a copy of his little book was burned.” [More via Wikipedia] [The Macomber biography can be found here.] [C.H. Spurgeon’s sketch, from his own autobiography, is here.] [James Hamilton on Keach, here, including dialogue while on trial and in the pillory.]

The Works of Benjamin Keach:

The Glory of a True Church. (73 pages)
{web txt via EEBO}
A treatise on church discipline.

A Gold Mine Opened. (525 pages)
{pdf epub mobi txt web via Internet Archive}
Also titled, “The Glory of God’s Rich Grace Displayed in the Mediator to Believers: and His Direful Wrath Against Impenitent Sinners.”
A collection of sermons on various topics:

The Marrow of True Justification. (45 pages)
{pdf via Digital Puritan}
Thank you Mark N. for providing this!

The Progress of Sin, or, The Travels of Ungodliness. (205 pages)
{pdf web via Google Books}

The Rector Rectified and Corrected. (222 pages)
{web txt via EEBO}
A treatise against infant baptism.

The Scriptures Superior to All Spiritual Manifestations. (7 pages)
{pdf web via Google Books}
A sermon from Luke 16:31. Part of the volume History and Repository of Pulpit Eloquence.

A Summons to the Grave. (79 pages)
{web txt via EEBO}
Alternately titled, The Necessity of a Timely Preparation for Death.

Troplogia; a Key to Open Scripture Metaphors. (1080 pages)
{pdf epub mobi txt web via Internet Archive}
Co-authored with Thomas Delaune. The modern reprint is titled Preaching from the Types and Metaphors of the Bible.

War With the Devil, or, The Young Man’s Conflict with the Powers of Darkness. (133 pages)
{pdf web via Google Books}
In epic verse.